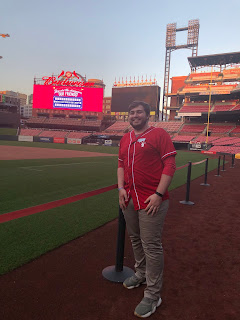 Less than a month after I started working at the ENF, I was in San Antonio with 150 of our scholars for the 150 for 150 Service and Celebration Weekend. That was my first time at a national convention. With all the excitement of the celebration, I knew that it was a unique event and not something to expect every year. This year, I was looking forward to going to St. Louis to see a different side of convention with a much smaller group of people: the members of our Scholar Advisory Board. After being a part of the SAB’s annual meeting, I can say one thing for sure: grab your shades because the future for Elks scholars is bright!

All of our scholars are obviously amazing, not only for their academic prowess, but their service to their communities. The members of the SAB stand out among the thousands of Elks scholars for one important reason: their dedication to engaging other Elks scholars. Staffing the Board’s meeting in St. Louis, I heard their ideas on how to continue making the Elks family stronger and growing programs available to Elks scholars. One focus of this year’s meeting is alumni involvement. As an Elks scholar alum myself, I think it is a great idea to engage our scholars not just while they are receiving their scholarship checks, but after they graduate. I was lucky enough to have applied for and been hired as the Elks Scholar Fellow. But if I hadn’t, I wouldn’t have taken advantage of any of the amazing opportunities the ENF provides for its scholars. I love the idea of more Elks scholars following my path and getting involved after their undergraduate years. The scholarship may only last four years, but Elks scholars will always be a part of the Elks family. 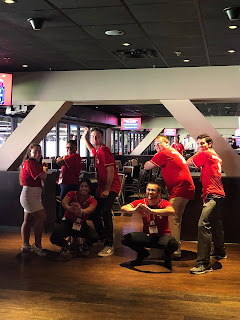 In addition to getting a behind-the-scenes look at the SAB meeting, I really enjoyed getting to know the SAB members. This year was particularly exciting because we welcomed three new members to the Board. It was easy to see how well they all meshed together and how excited they were to be a part of the SAB. The first night in St. Louis, we had our annual Board Meets Board dinner where the Scholar Advisory Board shares a dinner with the ENF Board of Trustees. Every year, the scholars love the opportunity to meet the Past National Presidents who make up the Board of Trustees, and each year the trustees are blown away by the scholars and all their goals and accomplishments. This year was certainly no different.

My favorite part of Convention, and I think I share this with most of the SAB members as well, was greeting Elks at the ENF booth in the exhibit hall. Similarly to the Board of Trustees, the Elks visiting the booth love talking to the scholars and hearing about everything they do. Plus, the Elks love seeing that their donations to the ENF are going to support amazing students like the SAB members. It is always so fun to get the chance to meet Elks and the booth gave us that opportunity!

With St. Louis and my first year at the ENF in the books, I can’t wait to see what my second year has in store! It’s a great time to be an Elks scholar, and now it’s on to Baltimore 2020!


In 2019-20, the Elks National Foundation will award $4.1 million in college scholarships, ensuring a bright future for our nation’s youth. As important members of the Elks family, Elks scholars have many social and service opportunities to connect with the Elks and one another. For more information about our scholarship programs, and for ways Lodges can get involved with Elks scholars, visit elks.org/scholars.