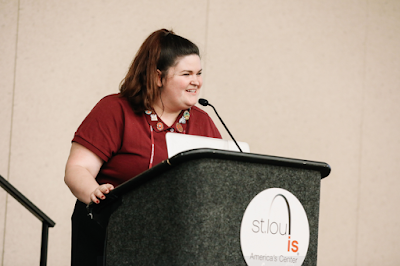 Since my first day working at the Elks National Foundation, St. Louis was on everyone’s minds, conversations and agendas. The buzz was palpable– it was as if St. Louis itself was our coworker, an integral part of our organization that sat in on our meetings, that joined us for lunch, that brandished a braggadocious air while describing the myriad of possibilities under its arch. “We have the best museum in the country!” St. Louis itself would tempt, “We have a National Park! We won the Stanley Cup! And all within a half mile of the downtown that will host the thousands of eager Elks who will convene for the 155th National Elks Convention.”

So, when I found out I would be joining this Elks-capade, I was beyond excited. A tad timorous – sure – but definitely excited.

After arriving in St. Louis (finally!), my jittery enthusiasm only grew. My colleagues and I shared a taxi from the airport to downtown, where we were greeted by red flags on every lamp post, unmistakingly emblazoned with the Elks logo, flitting in the hot summer breeze like a receptive wave. We dropped off our bags and immediately bounded over to the America’s Center Convention Complex where we began staffing the towering monolith that was our Elks National Foundation booth. Designed by our Development Manager and Convention Extraordinaire, Kate Keating Edsey, this booth stretched seemingly to the ceiling, almost in homage to the Gateway Arch that gleamed down over St. Louis only a half mile from us. The booth could be seen from any and every direction in the convention center, which was a needed quality, I quickly found out, as our booth was seemingly the place to be from that point on. 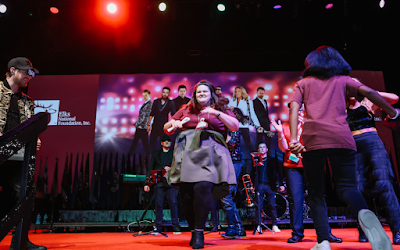 Between Fidelity Club sign-ups and prizes, the Spotlight Grant Drive, and the ribbons we gave out to Elk volunteers for their excellence in donations, scholarships, and grants, our booth was packed with Elks at all hours of the day. Never having a dull moment, I switched from passing out ribbons, to answering questions about grants, to collecting socks and books, to participating in seminars, to signing Elks up for Fidelity Club, all while finally meeting the volunteers I have been speaking to over the phone for months. It was wonderful being able to put a face to the name, and even more wonderful to see all the impressive swag they were donning. Elks were sporting pins they received from Exalted Rulers, First Ladies, and Lodges. They were rocking bedazzled shirts, perfectly spelling out the Elks logo and their Lodge in sequins and sparkles. Most importantly, they were decked out with all the ribbons they received, positioned in a stack practically reaching the floor to display their impressive accolades.

The most amazing part of the entire Convention for me was the turnout for the Spotlight Grant Drive. We had devised a plan for one lucky Lodge to double their Spotlight Grant through a raffle, which the Lodge would be entered into after a member donated either a new pair of socks, or a new or gently used children’s book. We expected a humble turnout, but the amount of donations was truly overwhelming. We ended up with 540 unique Lodges donating over 19 big boxes of children’s books and mountains of socks too plentiful to count. I was incredibly touched by these donations, and knowing that this was all for the chance to double the impact they would have in their community by progressing literacy or serving veterans experiencing homelessness made this drive so much more meaningful. It proved not only that if you give the Elks a task, they will embody their graceful animal
namesake and run with it, but that the age-old adage is true: Elks Care. 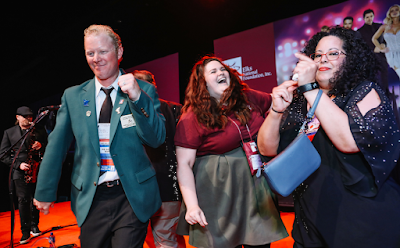 After the Opening Ceremony—where we celebrated the first membership gain in 39 years, paraded flags, and danced to America’s premiere cover band, The Party Crashers—it was time to say goodbye. John Kavula, the Elks Scholar Fellow, and I shuffled off to the airport with pins on our lapels and exhaustion in our eyes. Inspired by the glitz and the glam of all the Elks, I wore the most sparkly dress I could find as a tribute to my weekend. While the glitter set my ego off the charts, it also set off the TSA alarms. As John snickered from his pedestal of TSA PreCheck while I got a full body pat-down, I found solace thinking of all the Elks who would never dull their prideful Elk shine, and resolved that neither would I.

All in all, the Convention was an astute chance to peer inside the inner mechanisms of Elkdom. It allowed me to spectate on and participate in what it means to be an Elk, and all the dedication, passion, honor, and unabashed fun that goes with it. I can’t wait to watch this first year of membership increase turn into a streak and celebrate next year with all the Elks I’ve known, and all the Elks I’ll indubitably meet.

I’ll see you all next year in Baltimore!