Sometimes You Miss Your First Shot

Jacobi is a 2017 Hoop Shoot National Champion sponsored by Burlington, Vt., Lodge No. 916. He won a Frank Hise National Championship in the 10-11 boys division. Jacobi is part of the new Hoop Shoot alumni group, the Rebounders. Too old to compete and too young to serve on the BackBoard, these alumni are staying involved by serving at their local, state and regional contests. 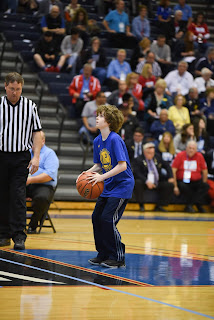 My grandparents, who were long-time Elks members, first told me about the Hoop Shoot when I was 9 years old. They took me to it one day while my parents were working. I had no idea what to expect, but I knew if it had anything to do with basketball, I was willing to give it a try. I participated for the next five years. I overcame some big hurdles along the way, like having to shoot while I had the flu or with a broken thumb, which I broke the night before we left for the regional contest, and I had to withdraw another year because of a neck injury due to a medical condition I have.

My favorite part of the Hoop Shoot was the feeling of community when I would go to the competition. At my house, we call them our Hoop Shoot family. The other kids, volunteers and Elks, we all felt like we knew one another and could have a good time together. I remember being so nervous as I got on the bus at my first Regional contest, and an older participant named Jamison took me under his wing. From that year on, I always tried to help others because it meant so much to have that relationship with Jamison. I still follow his basketball career, and he came to a couple of my AAU games and was one of the first to congratulate me on my win at the 2017 National Finals.

Making it to the National Finals was the ultimate goal every year I competed. I wanted to make it because I would get to travel, meet new friends, see old friends, and represent my community. I also wanted to make it because I am competitive and arriving at the National Finals meant that I accomplished my goal and would get to compete against the best free throw shooters in the country. In 2015, I made it to Nationals but did not win. This loss was tough for me, but it made me more determined than ever to get back to Nationals. I practiced harder than ever before to ensure I would give myself the best chance of getting there again. 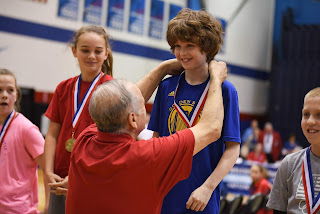 At the 2017 Finals, I missed my first shot, something I have never done, which added more nerves than ever. I ended up in a shoot-off with two other boys. I had to make 44 in a row to win the title. As soon as the ball went through the hoop, I felt so happy. I went to shake hands with my competitors, and then all I wanted to do was watch another Vermonter in his shoot, then go to the zoo. I felt like I had done what I had set out to do. There were so many great lessons I learned from competing in the Hoop Shoot. One of the most important things I learned was about how it was necessary to have a positive mindset and that if you put your mind to it, you can do anything. Sometimes in life you will miss your first shot, but you have to keep trying.

I knew from the moment I shot my last shot in the competition that I did not want my Hoop Shoot experience to end. I decided to volunteer at the Vermont state contest because I had volunteered at local contests and really loved the experience. I wanted to give back to a program that meant so much to me. When Steve Edgerley offered me the chance to help at the state contest, I couldn’t pass it up. This year at the state contest, I had the opportunity to talk to participants and to rebound for a few rounds of the contest. I hope to eventually join the BackBoard and volunteer at a higher level when I am old enough. 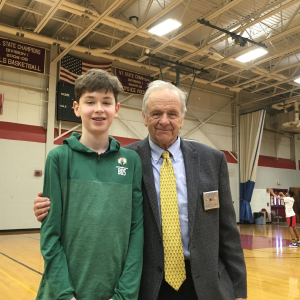 I want others to know the Hoop Shoot is a super fun program, and everyone should definitely give it a try. You meet lots of new people, and it teaches you a lot of lessons you will need later in life. Though I’ve aged out and can’t compete in the Hoop Shoot any longer, I do know that the skills I learned, like setting a goal, making a plan and following through on the plan even when it is very hard will serve me well no matter what I do.

If someone is going to participate in the Hoop Shoot, then I would tell them the most important thing is to have fun. Try your best to make it to farther rounds because the later rounds you go, the more fun it is. As you move on, you get to travel, which is a great experience in itself. The competition is competitive, and there are a lot of great free throw shooters, so you need to practice a ton if you want to take it seriously.

If something gets tough or you’re missing shots, just take a deep breath and keep trying. My advice is to develop a routine and stick with it even when you are struggling. If you work hard enough, you can achieve anything. The Hoop Shoot can help with so many things in your life. It has helped me with activities outside of basketball, such as school, because it taught me that even if something is hard, I have to persevere and not give up.

The Elks have been developing gritty kids through the Hoop Shoot program for nearly 50 years. For 2019-20, the Elks National Foundation allocated $1.1 million to fund the program. For videos, news from the court, and more information about the Hoop Shoot, visit elks.org/hoopshoot.