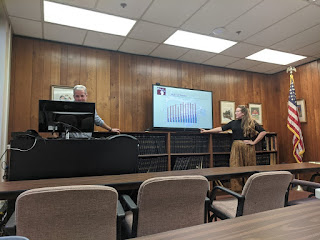 Numbers have always moved like birds in my mind. During the past few months the ENF’s Director, Jim O’Kelley, and I have been tasked with ENF’s File Analysis. We look at a bunch of numbers from this year and previous years, tell a story about what happened, and maybe make a few predictions of what will happen. In other words, look at where we have been, where we are now, and where we might be headed.

Numbers, like animals in nature, move in different patterns of behavior. For animal patterns and gatherings, the English language has words for how they congregate. Such as “a grumble of pugs” or “a murder of crows.” These words are filled with whimsy and truth, and I highly recommend collecting them.

When numbers move like geese in a skein, my job is easy. They fly in patterns, have a similar progression of movement with obvious parameters and outlines. If I look at where they have been, I know how they will move forward.

When they move like a murmuration of Starlings, I get slightly flummoxed. They follow each other closely around dips and curves that have no known motivation. Not unless every number is looked at in relation to the previous. Every minute movement of one can help predict the outcome of the next.

Last week, I spoke into the quiet, busy abyss of my cubicle, “Is anyone good at math?” I’m not good at following easy patterns. If 2 + 2 = 4, I would have found a nice walk through the twos, would have been lost by the four and would have ended back at 0, because surely, I had been subtracting, right? Through the help of my office friends, we were able to find the perfect equation to predict my skein of geese. ”

Predicting what will happen must be based within the parameters of uncertainty. I can definitively say where we have been, but I cannot say what is on the horizon. Our numbers are directly related to the community that makes up the Foundation: Our Lodges. Those communities are made up of people and those people have lives. And life is uncertain. 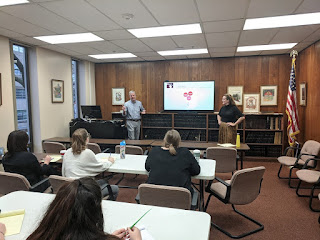 I have a few certainties I can tell everyone. So far this year, the Elks National Foundation has seen an increase in donors, gifts and revenue. I can say for certain that our average mid-year revenue makes up about 43.15 percent of our yearly total.

Now comes the uncertainty. Based on our current numbers, and our history of movement/numerical migration, I can deduce: The Elks National Foundation, in its 2020 Fiscal year, could exceed previous numbers or be just above the average of the past five years.

Humans do not move as quickly as a charm of goldfinches. We do not have the same collective, directional knowledge as a flutter of butterflies. We also do not hide in trees and squawk like an ostentation of peacocks.

The fastest moving groups of humans are those who live and work in community and work toward hope. The basis of our work at the Elk National Foundation is to promote those community connections. The perfect collective noun to describe our Lodges is “community.” We are a “community of Elks.”

When we walk into the conference room to talk about our Mid-Year File Analysis numbers, there will be a touch of uncertainty. What I will know for certain is that the ENF is moving forward and progressing. Our numbers show it through steady migratory lines. I can’t wait to see our numbers at year-end.

If you also love collective nouns, I highly recommend “A Charm of Goldfinches and Other Wild Gatherings”(Public Library).