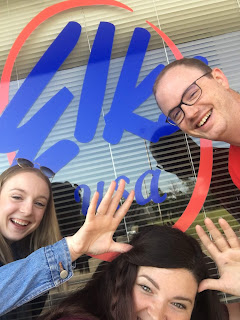 On August 2, CIPsters (or CIPerstars, depending on who you’re asking) Doug, Katie, and I headed out to Elgin, Ill., Lodge No. 737 to aid in their Step It Up project, a program run with the help of Beacon and Promise grants. This program was designed to provide children in need with brand-new sneakers before they head back to school, as shoes can be on the backburner when families in need are faced with allocating resources toward school supplies and books for the new year.

As someone who owns a whopping total of eight pairs of shoes—which is a generous estimation, mind you—I imagined this project to be impactful in their community with a couple hundred shoes maximum. Never in my wildest dreams did I imagine the sheer magnitude of the almost 2,000 pairs of shoes the Elks provided.

They had high tops, and they had slip-ons. They had light-up and sequined sneakers of all different colors and designs. They had hundreds of shoes from girl’s size 1 to men’s size 13, and every size in between. Before all this footwear could be distributed to the children and parents in need in the Elgin community, however, they had to be organized for maximum effi-shoe-ncy. 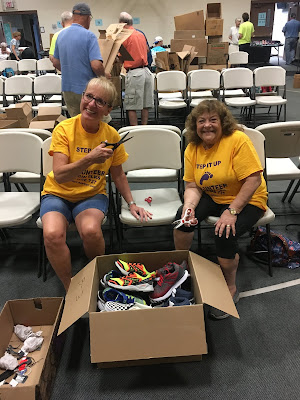 The slew of shoes, loads of loafers, and boon of boots had been stored throughout the First Baptist Church, where the event was held. When us CIPsters arrived early on Friday morning to assist in the unpacking and displaying of nearly 2,000 pairs of shoes, we found that the Elks and the First Baptist Church had been soliciting donations and organizing them by size and gender since the beginning of the year—like I said, effi-shoe-ncy!

We learned from Rebecca Huguley, the wife of the FBC pastor who leads the Step It Up program, that no detail was too small. She demonstrated how to unpack, unwrap, and display every pair of shoes, including specific ways to tie the laces, position each pair, and spruce up entire tables of shoes for a streamlined effect. Each table was assigned a single size, and Rebecca instructed us to place corresponding boys’ shoes on the left side of the table, girls’ shoes on the right, and gender-neutral shoes in the middle with an easily remembered saying: “Girls are always right.”

Katie, Doug, and I were assigned sizes 1-3 for boys and girls, which I will dare to say were the most adorable sizes of all. Whenever we could find a break from cooing at the cuteness of the miniature sneakers, we were talking with the Elk volunteers all around us. We discussed everything and anything—from ideas for the new Spotlight Grant to the Lodge’s other grant projects, from sports to bingo to fantasizing about retiring to the South where we would not have to deal with Midwest winters, these social interactions made the hours feel like minutes. Before we knew it, all 1,849 pairs of shoes were prominently featured in all their flashy glory! 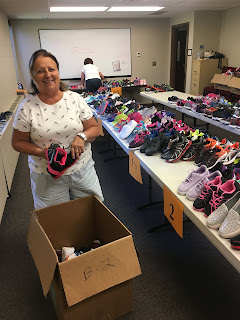 We then joined Greg and Sharlene Huske, the Power Couple of the Elgin Lodge, for a tour of the Lodge. Greg, a Past Exalted Ruler, and Shar, the Secretary and Grants Coordinator, imparted a wealth of knowledge about both the building itself, and the Lodge’s history. They shared their aspirations for the Lodge and revealed some incredibly innovative designs for cabinets and appliances that made the Lodge one of a kind. This included a massive, custom-built grill, constructed by a Lodge member out of up-cycled metal drums and other materials, which was put to good use when the Lodge made Sloppy Joes for all the volunteers after the Step It Up event.

After looking at pictures and finding the original Elgin, Ill., Lodge No. 737 charter, we were all tickled to see that we were less than two weeks shy of the 117th anniversary of the Lodge induction into the Benevolent and Protective Order of the Elks on August 14, 1902.
Overall, joining the Elgin Lodge on their Beacon and Promise grant project was as fulfilling as it was sole-ful. Being up close and personal to the action while working with the impassioned, engaged, and eager Elk volunteers helped us glean more about the project than any Final Report ever could. We can’t wait to Step Up to another Lodge for their CIP project!
The Elks National Foundation allocated $13.7 million this year to fund the Community Investments Program. Lodges meet local needs through grants that offer Lodges opportunities to serve the community in ways that will raise the Lodge’s profile, energize the membership, encourage former members to return to the fold, and gain the notice of people who want to be part of an organization that’s doing great things. To learn more about the Community Investments Program, please visit elks.org/CIP.