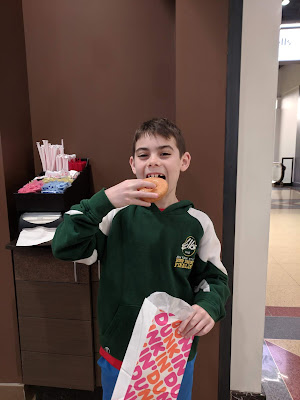 Every year, we ask the Hoop Shoot National Finalists to tell us fun facts about themselves. One of the questions we ask is, “What’s your lucky charm?” Finalists have a variety of answers. They list things like lucky jerseys, tie-dye socks, family members, or their favorite t-shirts. But this year, a Finalist from New York listed his lucky charm as a glazed donut.

For as long as I’ve been working with the trading cards, a Finalist has never listed food as their lucky charm, let alone a donut.

As a donut fan myself, I had to know more. I hoped to meet Tommy Goodelle and his family during the Finals weekend in Chicago. On the first day, I found myself in the FanZone with Tommy and his dad, Andy. I introduced myself and began my line of questioning.

“What’s with the donut?” (His dad told me it’s become a tradition so that Tommy isn’t shooting on an empty stomach.)

“Do you have a donut preference?” “Dunkin Donuts.”

Tommy is hilarious. He humored me as I asked every donut question that crossed my mind.

At the Hoop Shoot National Finals, we interview Finalists and their families to get their stories. We then turn these stories into Griteos. If you haven’t watched any yet, check them out. The 2019 ones will debut later this year.

I decided to ask Andy if we could interview him and Tommy. Andy said, “Of course”. Then sat down in front of the camera while we asked about the Hoop Shoot National Finals, the Elks, and of course, glazed donuts.

Like I said, Tommy is a funny kid. He had a lot of one liners about donuts, but beyond that, what struck me the most is how polite he is. After we were done with the interview, Tommy got up and shook everyone’s hands and thanked them for interviewing him. 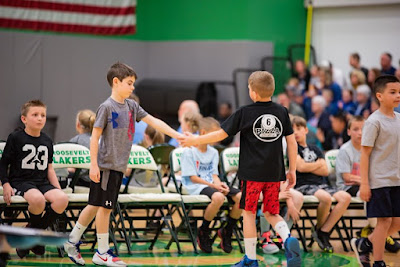 I went to get coffee at Dunkin Donuts the morning of the National Finals contest. After I paid, I ran into Tommy and his mom. He was getting a glazed donut, of course. I asked to take a photo of him with his donut. He politely agreed.

A few hours later, when I watched Tommy compete in the 8-to-9-year old contest, I saw this politeness show up as sportsmanship. After every single Finalist completed his round, Tommy stood up, walked to meet him at his seat and gave them a high five.

When Tommy set out for Chicago, he had one goal in mind: finish in the top three. And he did just that—shooting 23/25 and 5/5 in a shoot-off for third place. Tommy, a talented free-throw shooter, didn’t need the luck of a glazed donut to finish in third, but it certainly made for an entertaining weekend!