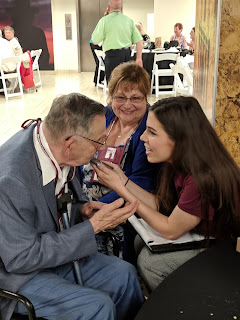 It’s taken an entire week to fully digest everything I experienced at my first Elks National Convention, and I think I can finally do justice in putting pen to paper, or fingers to keyboard, in sharing them.

I started working as the Communications Assistant at the Elks National Foundation in October of last year. In just nine months, I’ve been exposed to stories, people and moments, and I’ve been working hard to convey these interactions in an honest, interesting light that resonates with our audience.

But it wasn’t until I shook hands with “Crazy Richard” Clayton and his wife; sat down with Nester Tan, a platinum donor with the ENF; or spoke with many of the Elks I’ve been writing about these past several months that everything finally clicked.

There’s a scientific way to say this, but I’m a writer, so I’ll use words. You can study a topic for hours and hours, but you’ll never be able to memorize what you’re reading until you can connect it to something else. Now, I’m going to apply that to how Convention has changed my perspective on my role in writing stories about the Elks.

I asked Clayton a series of questions I thought would adequately help me tell his story, his story being the reasons he donates at the Faith level each year. I was able to get his point across, but I didn’t know who Clayton was outside of the answers he gave to the questions I asked.

Then, I was standing by the elevator of the ENF’s donor event and I met Clayton and his wife. Instead of an interview, we talked. They mentioned wanting additional copies of the Heartbeat issue they were featured in so they could give to their kids, and they were so glad to have the one copy I had in hand to take home from Convention. This interaction shed the why behind Clayton’s support for the ENF’s programs for kids like the Hoop Shoot and scholarships—the Claytons had kids of their own and supporting the ENF allows them to support other families just like theirs. 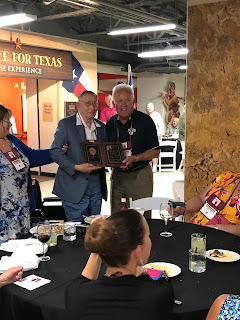 Another Elk epiphany came when I had the opportunity to speak with Tan whose been an Elk for 36 years. As he’s grown older, he’s made it his personal mission to become a major donor to the ENF because he believes in what we do. Speaking with Tan about his life’s work, family and commitment to the Elks put a lump in my throat and brought him to tears more than once.

When I tell Tan’s story, it’s not just his answers that I’ll write about; it’s also the gratitude on Tan’s face as Elks thanked him for his contributions and as I told him we would publish his story on our website; and I’ll write about the pride beaming from Tan’s daughter, Heather, as he accepted his plaque at the major donor event with a standing ovation from the rest of the room. These are the moments you don’t get from a Q&A, but the ones that are crucial in writing a thoughtful narrative.

In four days, I met some of the kindest, most upbeat and goodhearted people. Before, it seemed suffice to call them Elks, but not anymore. Now, I have an arsenal of adjectives and anecdotes to add to the stories that I can't wait to start writing.