My First Shot at the #HoopShoot

May 17, 2017
by Blaire Shaffer
Communications Assistant

My feet pounded the sidewalk as I thought about the fresh day before me. For those of you who don’t know me, my dog, Bruno (Border Collie and German Shepherd Mix), and I go for runs in the morning before work. Besides being a terrific way to wear off his 19-month-old puppy energy, I use this time to reset and focus on a new day I have been blessed with.


Today, I felt excited and a little nervous. It was the kick-off day for an event the ENF has been tirelessly tolling on for months. I heard stories from my fellow staff members describing the Hoop Shoot National Finals, but there is something to be said about actually experiencing it for yourself. For the National Finals, I was put in charge of managing the Social Media for the weekend. In fact, many of you probably saw me, carrying the iPad pro and using it to take pictures or videos. 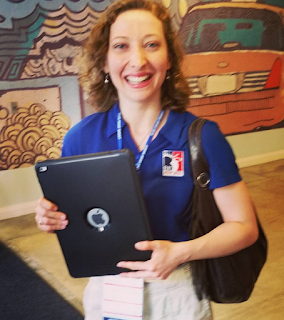 
On Friday, I spent the day floating to each event and documenting what happened on the ENF’s Social Media accounts. I started my day at the Elks Veterans Memorial, traveled on the trolleys, and spent time in the Kids’ Zone. That afternoon, I helped with preparations for the finals. In the evening, I was chauffeured by bus to the Chicago Sports Museum for the Finalist Fest. I spent the night sharing fun moments on Social Media.


Saturday was the big day! I began my morning, by helping with final preparations in the AV station. I sorted through scripts and assisted in checking the PowerPoint. For the rest of the contest, I was lucky enough to watch from a perch above the arena. I recorded the Facebook Live Videos of Jim O’Kelley and Bart Powell (son of the Program’s first National Director). discussing the contest as it played out. I also ran to the AV Station before and after contest to assist with music. If forced to choose a couple of my favorite moments from the contest, I would say watching Kale Misegades shoot with his shattered kneecap and the seven intense shoot-offs!


As I climbed into my Lyft ride home, I couldn’t get over how quickly the #HoopShoot National Finals weekend flew by. I sat in the car, digesting the contest. There were so many inspiring displays of grit, determination and sportsmanship.  The Finalists’ hard work and positive attitudes were incredibly inspiring to me. I can’t wait to see what the next Hoop Shoot National Finals will bring!


The Elks have been developing gritty kids through the Hoop Shoot program for more than 40 years. In 2016-17, the Elks National Foundation allocated $952,760 to fund the program. For videos, news from the court, and more information about the Hoop Shoot, visit, elks.org/hoopshoot.