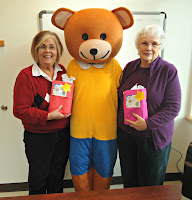 The CIP office, and the world, has lost a kind, selfless champion. Sharon Kolkhorst, member of Coos Bay, Ore., Lodge No. 1160 and Weekend Share Bear Snack Packs program project manager, passed away last week. With Sharon at the helm, Coos Bay was one of the first Lodges to receive a $10,000 Impact Grant for their Weekend Share Bear Snack Packs program when the grant was introduced in 2008. Sharon’s commitment to and passion for the program has continued since—in 2017, the Lodge was awarded its ninth consecutive Impact Grant. Only one other Lodge from the original Impact Grant class can say the same. In fact, Sharon and her husband Lou have helped the Lodge secure more than $115,000 in CIP grants since 2006. 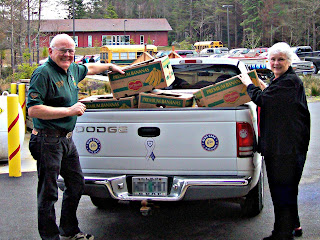 However, life is about more than money. It’s about creating lasting relationships and leaving your community better than you found it. Sharon did just that. I had the pleasure of meeting Sharon and Lou on an Impact Grant site visit to Coos Bay in 2015. It’s a trip I’ll never forget—not because of the crazy beauty of the Oregon coast or the good food, but because of the welcoming warmth of Sharon and the Coos Bay Elks family. I got the chance to see the snack pack program in action, meet all the dedicated volunteers and talk with partners who have directly benefited from the program. What was clear was that Sharon was the steady, organized, passionate glue that held it all together. What was also clear was that she wasn’t in it for recognition—we could hardly get her on camera to talk about the project!

As with anyone who truly makes an impact, Sharon’s actions were what spoke volumes. Thanks to her hard work with the Impact Grant over the years, thousands of elementary school students experiencing food insecurity in the Coos Bay area did not go hungry over the weekend. I am grateful for that trip and lucky to have worked with her these past couple of years. Sharon embodied the true meaning of selfless service, and she will be missed.