Hi, I am Lynn Glick from Alameda, Calif., Lodge No. 1015. I am completing my third and final year as District Scholarship Chair. When I first joined the Elks, I helped with our Lodge’s scholarship judging. But it wasn’t until I became the Bay District Scholarship Chair, and also had the opportunity to judge applications at the state level, that I really understood how much work goes into the scholarship process. I am not just talking about the work of the Lodge Chairs, the District Chairs, and the state judges, but the work of the applicants themselves.

I had no idea how hard high school students work at part-time jobs, and how much time they spend participating in sports, practicing their instruments, singing in choirs, doing service projects, and being involved in a host of other outside activities. Nor did I realize that opportunities for leadership were so prevalent in high school. And that’s in addition to all the time they spend on their academics.

In January, I had the pleasure of meeting 19 Elks scholars when they came to the Bay Area for the Winter Elks Scholar Service Trip. The Elks Scholar Service Trips exist to offer Elks scholars the opportunity to learn about societal issues, serve in the name of the Elks, and to connect with their Elks family. My Lodge has a dinner every Wednesday, so I arranged for the scholars to enjoy a meal at the Lodge with our regular Wednesday night Elks, and several Elks officers from other Lodges in our District, and from two neighboring Districts.

We made it a family affair. I enlisted the help of my husband, Jeff, who is also an Elk, and our teenage daughter to greet the scholars when they arrived. Jeff enjoyed talking with them, and my daughter received valuable information that no parent can impart. She learned about the college application process and life as a college freshman, and came away with a lot of good information about how to make the most of her high school years. Having a chance to talk about these things with people who are only a few years older had a strong impact.

In speaking with the scholars on the trip, I was surprised to learn how many of them have parents who are Elks. This made me remember my reasons for joining the Elks. My dad was an Elk in Sioux Falls, South Dakota and I grew up going to Elks family events. He eventually transferred his membership to the Alameda Lodge when I was Exalted Ruler. I loved being able to spend time with him at the Lodge. We both liked volunteering for our Lodge Charity Gaming Night together, and he taught me how to deal blackjack, although I have never been as good at it as he was. 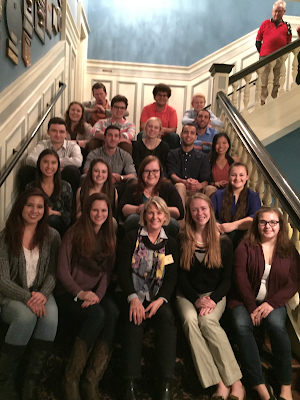 During their week in the Bay Area, the scholars served at Harbor House in Oakland. When I started teaching at an elementary school near there, many of my students went to Harbor House for after school snacks and tutoring. I am thrilled that this organization is still helping students in the neighborhood, and am very happy that the Elks scholars were able to help there.

I have always been a big supporter of the Elks scholarship programs, and donate to the Elks National Foundation to help keep these programs going. I have taught at several schools with a lot of low income and recent immigrant families, where the majority of students don’t have the chance to go to college. I have seen how having the chance to go to college has benefitted my former students, and am proud to have even a small role in a program that has helped thousands of deserving students reach their goals.

I wish every Lodge had the opportunity to host Elks scholars, and every Elk had a chance to meet and get to know them.

If you would like to engage Elks scholars in your area, please email scholarship@elks.org and watch Engage a short film with a message from Elks scholar Macy Warburton about the importance of connecting with Elks scholars.

We know Elks scholars are dedicated to service. Elks scholars now have the opportunity to come together in service with their Elks scholar peers. In 2015-16, the Elks National Foundation will offer three Elks Scholar Service Trips for up to 20 Elks scholars each. They are scheduled for the summer, winter and spring in locations from coast to coast. These trips provide scholars the opportunity to learn about societal issues, serve those in need in the name of the Elks, and connect with their Elks Family from across the country. For more information about the trips, click here.