My Takeaways from a Meeting of the Minds

Last month, for the second straight month, we put the Elks Veterans Memorial to good use serving homeless veterans. Back in November, we ran a neighborhood clothing drive right out of the Rotunda. This time around, we hosted various stakeholders in Chicago's fight to end veteran homelessness for dinner and discussion in the Grand Reception Room.

The event drew some heavy hitters. Guests included representatives from Senator Dick Durbin's office, the mayor's office, two of the three VA medical centers serving the metropolitan area, and three area non-profits. The Elks were well represented as well, of course. Grand Secretary Bryan Klatt was there, as were Past National President Paul Helsel, a member of the Elks National Veterans Service Commission, and Mary Morgan, the director of the Commission. 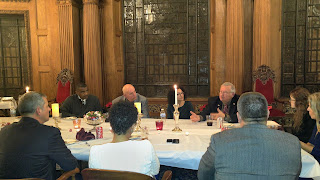 Paul Helsel talks about what the Elks can contribute to the effort. (That's me in the foreground at left, listening attentively!)

Three things stuck with me that night.

While talking during dinner with Lisa Morrison Butler, Chicago's commissioner of the Department of Family and Support Services, I learned that Chicago's backlog was 450 veterans, with around 225 new cases each month. The commissioner was optimistic that the city could achieve functional zero by June.

The second thing that stuck with me was a comment I heard a couple of times while mingling prior to the dinner, and that is that everyone wants to help the veteran who looks like Pat Tillman. Tillman, in case you're not familiar, was a professional football player for the Arizona Cardinals. After the attacks on 9-11, he quit football, joined the Army, and eventually became a Ranger. He died in Afghanistan in April 2004, a victim of friendly fire.

Anyway, the point was that Pat Tillman was a strong, powerful, good-looking man, the kind of soldier you'd see on a recruiting poster. When many of us think about helping homeless veterans, that's what we have in mind. There's this notion that our soldiers went straight from the battlefields in Afghanistan and Iraq to the streets of America, and all that it will take to put them in homes now is an easy hand up. The reality is that as cities like Chicago clear out their backlog, they're starting to reach the veterans who have been chronically homeless.

Which leads to the third thing: During dinner, one of the non-profit attendees who has been finding and providing housing for homeless veterans for years said, "The easy ones are gone."

I saw what he was talking about in October when I went up to the North Chicago VA Medical Center to interview seven formerly homeless veterans for a new series of films. If you haven't seen One Last Stand yet, our short feature film about the fight to end homelessness, please find the eight minutes and 45 seconds to watch it. You can do so right here:

The playlist also includes our profiles on each of the seven vets in the film. (Five are already done; two are coming.) I'm not sure what I expected to find when I went up there to interview them, but I was definitely surprised by how different each of their stories were. And not one of them served during our two recent conflicts.

But regarding the comment that the easy ones are gone, I get it. Listening to their stories and hearing what they went through--crime, drugs, fear, mental and physical health issues, living in their cars, bouncing around shelters, dumpster diving, finding housing and losing it again and again--it's clear to me that helping them find stable housing required a ton of hard work by dedicated social workers at the V.A. and community partners like the Elks.

It's likely to be even more difficult to find housing for the 450 vets in the backlog here in Chicago, and thinking about that is daunting. But it's also encouraging to know that it can be done. That all it takes is hard work. We can do hard work.

We know the V.A. is in this fight for the long haul. So are the Elks.

I'll be blogging about the various films in this new series over the next few weeks. I hope you'll follow along, watch the films, and, most important, get involved. You can learn more here.