Ten Things You Didn't Know About the Elks 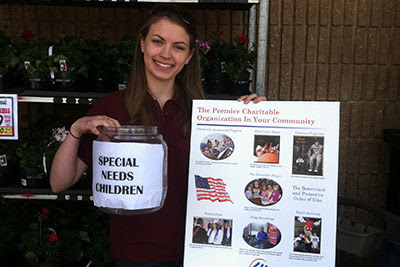 Though Elks may know about all the great work Lodges do across the country, Elks scholars are not as familiar with the Order. We asked Elks Scholar Advisory Board member and Legacy Awards recipient Maryann Slater to share a few facts about the Elks that scholars might be surprised to know!

My name is Maryann Slater and I’m the President and Junior Representative of the Elks National Foundation Scholar Advisory Board, a board comprised of Elks scholars charged with sharing ideas to shape the future of the Elks scholar experience. I’m a Junior at Rutgers, majoring in Spanish and Communication. I’m a Legacy Awards scholarship recipient and both of my parents are Elks! Since I’ve grown up in the organization I’d love to share some of my knowledge with you to hopefully give you a better understanding of the organization that gave you your scholarship.

Ten things you didn’t know about the Elks…until now!

2.    The organization was originally founded in 1868 in New York City by a group of actors who called themselves the Jolly Corks.

3.    The Elks National Foundation is the charitable arm of the Elks. Founded in 1928, the ENF has contributed more than $324.6 million toward Elks' charitable projects nationwide.

5.    Each Elks Lodge has its own local community service projects. In addition, each Elks State Association has its own project that it manages for the whole state.

6.    The Elks are huge supporters of our country’s veterans and hold many events and programs throughout the year to show their appreciation.

7.    If you become a member of an Elks Lodge, you can visit any other Lodge in the country when you’re traveling. If you move, you have the option to transfer your membership.

8.    The Elks National Foundation fully funds the Hoop Shoot and Drug Awareness Programs for children throughout the country—meaning you don’t have to wait to apply for a scholarship to feel the generosity of this organization!

9.    Each Lodge has its own leadership—the Lodge President is called the Exalted Ruler.

10.    The Elks have both State Conventions and National Conventions where members from all over come together to meet, attend meetings, share meals and make connections!

While this is a very brief introduction to the Elks, I hope that it opened your eyes to some facts you may not have known! Check out www.elks.org for more information, and email scholarship@elks.org if you’re interested in connecting with a Lodge near your home or college campus. I wish you all the best for this academic year!