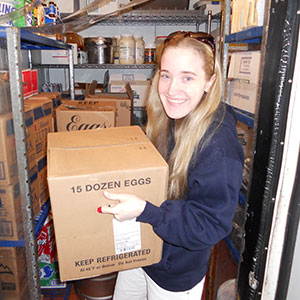 It has been an honor and a privilege to serve as a founding member of the Elks Scholar Advisory Board the past four years. As a 2006 Legacy scholar, sponsored by Ormond Beach, Fla., Lodge No. 2193, I never imagined that I would have the opportunity to become involved with the Elks on a national level, representing Elks scholars from across the nation, and sharing my story and ideas with Elks and fellow scholars. As a Legacy Awards recipient, as well as an Elk member, I was able to approach issues concerning Elks scholars from a unique prospective.

My term on the Scholar Advisory Board afforded me numerous opportunities to meet and work with leaders, make friends with fellow Elks scholars, and promote the good work of the Elks by organizing service projects in my home and college communities. I was privileged to organize four Elks Scholar Month of Service projects as a Campus Leader. I had the opportunity to attend Elks National Conventions in Orlando, Phoenix, and Austin. I assisted with two national Elks Hoop Shoot competitions in Springfield, Mass., where I met and mentored boys and girls who are the best basketball free throw shooters in the country!

These experiences helped me to gain a deeper understanding of the Elks organization and a stronger desire to continue to serve my community through service with my local Elks Lodge. During my term on the Board, I was selected as both my Lodge’s Government Relations and Scholarship Chair. It is now my turn to assist outstanding and deserving students in my community.

The Elks isn’t just an organization where adults socialize and raise funds for scholars like you and me, but, rather, it is an organization passionate about serving local communities, young people, veterans, and those in financial need. I am grateful to be a small part of this organization, and I am honored to be a member of the Elks family.

I encourage Elks scholars to become involved with the Elks in any way possible—by becoming an Elks scholar volunteer, or an Elks scholar speaker, or teaming up with your local Lodge for a Month of Service project in April. It is my hope that more Elks scholars will take the initiative to learn more about what the Elks organization does, how it serves communities, and, hopefully, join the Order when they turn 21, as I have. With more than 2,000 Elks Lodges throughout the country, there is always an Elks Lodge nearby.

The Elks National Foundation provides $3.74 million in college scholarships each year. Today’s Elks scholars are tomorrow’s Elks. Be sure to include Elks scholars from your Lodge in Lodge events and service projects. For more information about our scholarship programs, and for ways Lodges can get involved with Elks scholars, visit www.elks.org/enf/scholars.