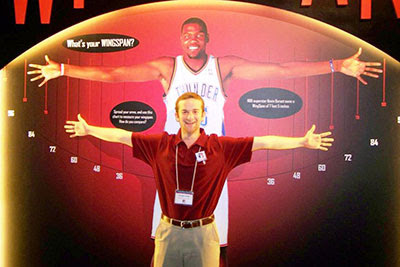 The Hoop Shoot Finals took many of these kids on their first plane ride and taught them levels of maturity that I was surprised to find in 8- to 13-year-olds. The competitors treated each other as true friends off the court and many made plans to keep in touch.

More importantly, they were all humble and caring. While playing horse with one 8 year old, he stopped the game while I was losing and said that we could switch scores, taking pity on me even though I was more than twice his age and twice his height…he still won.

Then there were other kids who, dedicated to going to college, asked me to write down a list of scholarships that I had applied for—the Elks Most Valuable Student scholarship being one of them—so that they could apply when they got older.

Despite the differences in personalities and backgrounds, all of these kids were excellent at, yes, basketball. I didn’t think that watching person after person take free-throw shots would be a lot of fun, but when multiple competitors sank every shot, I sat on the edge of my seat knowing that a single missed shot could cost someone the competition.

The experience was memorable for me because it opened my eyes to how great an impact the Hoop Shoot has on the lives of its competitors and the communities that they live in.

Through the Elks National Hoop Shoot Free Throw Program, the Elks National Foundation offers youth the opportunity to engage in healthy competition, connect with their families and community, and succeed both on and off the court. In 2013-14, the ENF allocated $692,750 to fund this program. For more information on the Hoop Shoot, visit www.elks.org/hoopshoot.