Serving Up Some Hoops 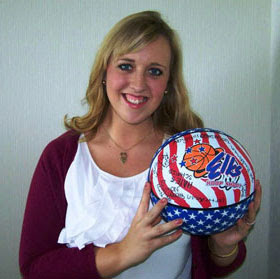 In the late afternoon of March 8, 2013, I began the seven-hour drive from Kansas State University to Denver, Colo., despite all the news reports about Winter Storm Triton. There was nothing that would have stopped me from making this trip. Why? I was headed to the 2013 Region 8 Hoop Shoot Contest.

I first learned about the Hoop Shoot program after winning a Most Valuable Student scholarship in 2010. Fast forward two years and five Hoop Shoot contests later, and you will find that I have fallen in love with the program. I am always amazed at the skills of the participants and the love and care shown by the Elks.

This contest proved to be no different. I drove into the hotel parking lot at 12:30 a.m., and Regional Director Randy Gragg was waiting to make sure I arrived safely. Even with a hectic weekend ahead of him, he showed his caring Elks spirit by making a point to welcome me with open arms.

The next day I was able to greet all the contestants, their families and supporters as they arrived at the hotel full of excitement. The best moment of the registration process was being able to help surprise one of the contestants, whose grandparents had flown in from New Orleans without him or the rest of the family knowing!

After registration, we were all expecting to relax and practice before the contest the next day. Reports of the incoming storm, though, caused the contest to be held that very night! Nobody saw the schedule change coming, but with the guidance of Regional Director Gragg and the help of many others, the contest went off that night without a hitch. 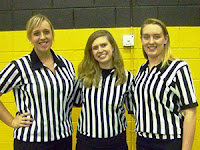 During the contest, I served as a ball retriever with two other Elks scholars, Kelsey Moore and Brittany Earle, who made it to Denver at a last minute’s notice. It was such a blessing to meet these two amazing women, but an even greater blessing to give back to an organization that has greatly invested in us.

Before leaving Denver, I attended the awards banquet, where I was recognized by the Elks and given a basketball signed by all the contestants…what a great keepsake! It then came time for me to say my goodbyes to everyone. Little did I know that I would be stuck in Limon, Colo., with 15 Kansas Elks as Winter Storm Triton kept us from driving. But the bad weather was outweighed by the meal and great conversation we shared.

The memories made during my time at the Region 8 Hoop Shoot are endless, and the basketball I received serves as a reminder of them every time I look at it. More memories are on their way, though, as I will be attending the National Hoop Shoot in April!  Here is to counting down the days until I am reunited with all the amazing Elks and the Hoop Shoot contestants.

Through the Elks National Hoop Shoot Free Throw Program, the Elks National Foundation offers youth the opportunity to engage in healthy competition, connect with their families and community, and succeed both on and off the court. In 2013-14, the ENF allocated $692,750 to fund this program. For more information on the Hoop Shoot, visit www.elks.org/hoopshoot.