A Farewell to Elks

May 02, 2012
By Christine Vaccarello, Development Associate 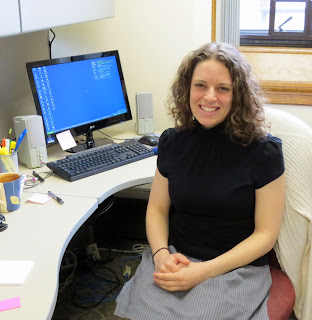 “Where do you work?” “What do you do?” Over the last four years, I’ve tried out many different explanations when responding to these questions. I’ve learned that to the non-Elks public, the Elks National Foundation is not a household name.

So when I tell people that I work for the Elks, they almost always want to know more. Next, they’ll either ask, “Who are the Elks?”, or my favorite, exclaim “I know the Elks!” and then share a special memory about the Lodge in their community or an Elks family member. For instance, one of my friends recalls the Elks sponsoring his youth tee ball team, from the uniforms to the post-game snacks.

Here in Chicago, many people who hear “Elks” associate it with the Elks Veterans Memorial building. It’s a Chicago landmark, after all. They’ll ask, “You work in that building?! Can you give me a tour?” I respond, “Become an ENF donor, and I’ll be glad to give you a tour.”

But my favorite thing to talk about is the Elks’ philanthropy. I watch peoples’ eyes widen when I mention the ENF’s $23.6 million in charitable distributions this year. I brag about our volunteers and their dedication to the ENF and their communities. I share a funny anecdote from a conversation with an ENF Chair––they always keep me smiling.

I’m writing this post on my last day working at the Elks National Foundation; tomorrow I’ll begin a fundraising position at another organization. It’s hard to believe that fewer than five years ago, I had never heard the term Grand Exalted Ruler. Despite being educated and trained in fundraising, I didn’t know about gun raffles or charitable Bingo.

After four and a half years here, I am inclined to agree with the Elks’ assertion that BPOE stands for the Best People on Earth. The long-distance Elks friends I’ve made are people I won’t forget. Elks members have taught me the true meaning of the word “volunteer”. Being a bit of a nerd, I already knew that it comes from the Latin volo, “to want”, which is also the root of the word benevolent. To Elks, volunteering is more than a hobby; it’s a way of life. This is why the Elks National Foundation thrives.

I’d like to sincerely thank all the ENF donors and volunteers who’ve made my job a pleasure. Keep up your passion for the ENF mission and know that you are inspiring people across the country, including here at the ENF headquarters.

And Chicagoans, take note: though I won’t be working in the building, I still know my way around the Veterans Memorial and will gladly arrange a tour. Just don’t forget your checkbook.