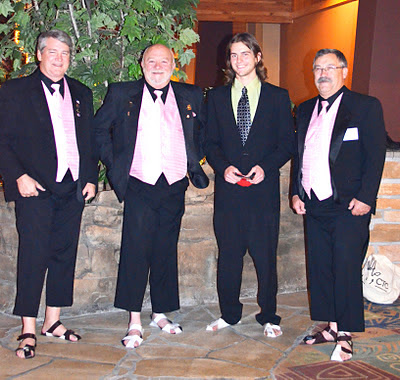 This summer, the Elks National Foundation recognized me as the 2011 Alum of the Year during the Elks National Convention in Phoenix, Arizona. After accepting the award and speaking at the convention, I met Michigan Elks President, Keith Alverson and his wife, Greer. While talking, he mentioned a major Michigan Elks gathering and we agreed to keep in touch.

A few months later, Keith invited me to speak in Sault Sainte Marie at the Michigan Elks Association’s 55th Annual Fall Conference. As the ENF Alum of the Year, I addressed the Michigan membership at both their business session and ladies luncheon to share my Elks scholar story and represent the Elks National Foundation’s focus on programming that benefits Elks, Elks scholars and other programs recipients and our communities.

More than 300 people listened closely as I shared my not-so-distant memories of applying for an Elks Most Valuable Student Scholarship at my local Lodge, Detroit-Redford, Mich. Lodge No. 2097, and watching my application work its way up from district, to regional, to state—and finally receiving notice that I would be honored at the national level.

I recounted how the Elks sponsored my little sister, allowing her to attend a Down Syndrome speech and language therapy camp where she learned how to sign and eventually talk.

I described the value of the Alum of the Year opportunity and activities like Elks scholar meet-ups on campuses across the country, and other community and youth initiatives led by active young Elks scholars.

Finally, I shared how my company, TOMBOLO, is changing the world by introducing youth to hands-on social entrepreneurship and promoting awareness of conscious consumption and creative reuse.

Before I could sit down, everyone stood up—with applause, photos, handshakes, and smiles that followed.

But my conference interaction didn’t end at the mass audience level; I engaged on a deeper and more personal level with long-time, active and committed Elks. I met people with exciting stories like Walt Muellenhagen whose friend launched a company that, in contrast to my summer sandals by TOMBOLO, manufactures snowshoes out of recycled tires right here in Michigan. I met Brad Saegesser, Michigan State Scholarship Chair. He introduced me to the Water Warriors program—a group of volunteers who brave the cold Great Lakes water by riding Sea-Doos hundreds of miles to raise millions of dollars for the Special Olympics. I talked with Ray Chase who is connecting me with his Lansing Lodge to speak, and is encouraging young adults to get involved in their community and give Elkdom a try. And these are just a few examples of the great connections I made.

The Elks impact goes beyond statistics and scholarship dollars. Find a local Lodge, find a friend, and attend one of the events there. If you like what you see, who you meet, and your overall experience, submit your application to become an Elk.

For more information about Elks scholar opportunities, including the Alum of the Year Award, please visit www.elks.org/enf/elksscholars.